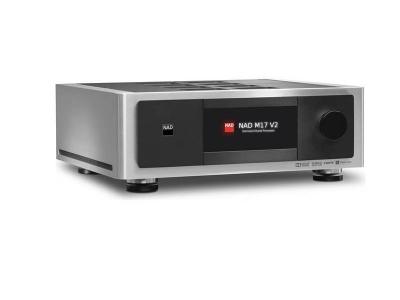 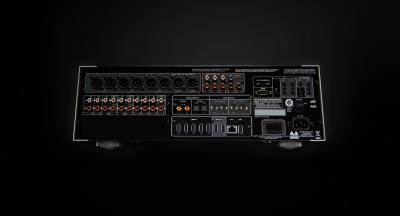 Surround Yourself with Perfection

The M17 V2 offers full HDMI video switching and surround sound decoding along with 11.1 balanced outputs. Brimming with a full complement of sophisticated features like the high resolution lossless surround formats from Dolby TrueHD, DTS: X and DTS-HD Masters Audio decoding, and now object-based audio with Dolby Atmos, the M17 provides the highest levels of performance. The surround mode of the source material is automatically detected via the digital inputs of the M17 V2, and the most advanced form of decoding, based on your setup, is switched in. Conversion of the encoded digital bitstream is performed with high resolution and extremely linear D/A converters carefully selected for their performance capabilities.

The latest HDMI features, including HDCP 2.2, 4:4:4 colour resolution, High Dynamic Range video support, and CEC/ARC, are all included. Digital inputs and outputs are available in both coaxial and optical formats to make it easy to attach all your digital sources. Digital inputs are converted to analogue for use in Zone 2, and you can choose to convert unused tape outputs for Zone 3 and Zone 4 use with independent source selection and volume control. With BluOS® we have also made it easy to add more speakers for listening to music in additional rooms. IR repeaters, 12V triggers to automatically switch amplifiers on and off, and an RS-232 data port makes it easy to connect to highly advanced automated control systems, such as Crestron and Control4. Thoughtful features like discrete On and Off codes, direct access to inputs and FM station presets facilitates the integration of the M17 V2 into elaborate remote control systems.

Master Quality Authenticated (MQA) is a revolutionary end-to-end technology built into every BluOS Enabled amplifier to capture and deliver MQA music to your speakers in the purest quality. All BluOS Enabled players and systems include a powerful decoder and audio renderer for the millions of the MQA encoded songs, The MQA logo shown in the BluOS app indicates that the unit is decoding and playing an MQA stream or file, and lets you know that you are hearing exactly what the artist recorded and approved in the studio.

Dirac Live® and its powerful room correction software is built in to the M17 V2, including its own calibrated measurement microphone and Dirac Live Pro. Advanced users can build the perfect listening environment that corrects for both the timing and colourations in sound, including the ability to create custom target curves for room response and the option to choose from a variety of third-party calibrated microphones.

A unique among high-end AV Processors, BluOS®, the advanced operating system and music management software shared with NAD’s sister brand Bluesound, is included in the M17 V2. When connected to the Internet via Ethernet or Wi-Fi, the M17 V2 has access to thousands of Internet radio stations and over a dozen high quality music services including Spotify, Amazon Music, Tidal, Deezer, and many more. With full support for Master Quality Authenticated (MQA) technology, the M17 V2 has the highest resolution audio performance available combined with the highest definition video performance.